In July 2021, 313 fatalities occurred on the roads of mainland France and 30 overseas.

Travel in July 2021 was slightly higher than in July 2020 (an average of +10% compared to July 2020 according to the Cerema traffic dataviz). The increase is particularly marked at weekends, but is also present on working days to a lesser extent. The results concerning accidents and injuries thus reflect the resumption of French mobility, with an accident rate of the same order as that of July before the pandemic, while road deaths are still lower.

Since the curfew was lifted on the June 20th, no measures restricting the mobility of French people are in place in mainland France. Fatalities in July 2021 are significantly higher than that recorded in July 2020, when all travel was also authorised in July 2020 on French territory.

Motorcyclists fatalities, with 77 fatalities, are below the average level of the last 10 years. The relatively wet weather in July 2021 in many regions played an important role in limiting motorbike use.

Car users fatalities were higher than in July 2020 and of the same order as before the pandemic: 153 car users were killed compared to 122 in July 2020, i.e. 31 more fatalities. This is slightly higher than July 2019 and similar to July in previous years. The significant drop of around 30 fatalities per month over the start of the year, compared to the years prior to the health crisis, is therefore not present for motorists this July.

60 young people aged 18-24 were killed on the roads in July 2021, higher than in July 2020 and July 2019. Deaths among young people appear to be returning to pre-crisis levels following the lifting of the curfew. 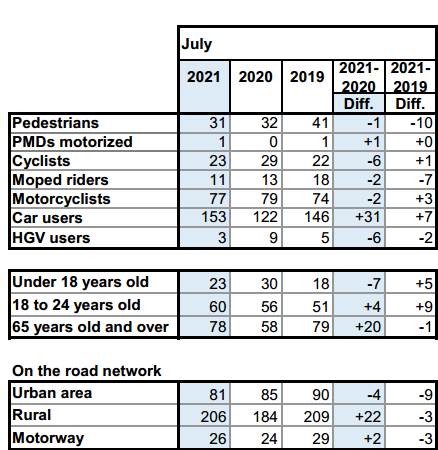 Car users usually account for half of all road deaths. Their fatalities over the last 12 months is estimated at 1,267 compared to 1,622 for the entire year of 2019, which reprensent a drop of -22% over a bit more than a year. Car users fatalities in July 2021 are higher than in July 2019 (+7 deaths).
Pedestrians fatalities also drops sharply over this period: it is estimated that 367 pedestrians were killed in the last 12 months compared to 483 over the entire year of 2019, which means a decrease of -24%.

These very strong declines are to be put in relation with the strong decrease of the fatalities among seniors aged 65 years or more, particularly those aged 75 years or over, who have severely limited their movements during lockdowns and curfew periods, but have also probably gone on holyday much less. Seniors account for half of the pedestrians fatalities each year, and more than a quarter of the car users fatalities.

The fatalities of powered two-wheeler users is also decreasing: the drop among motorcyclists represent -12% with 539 killed in the last 12 months compared to 615 killed in 2019, a decrease that is being reduced in recent months. The decrease in moped fatalities has been maintained since the beginning of 2021, -31% compared to 2019 with 92 moped fatalities in the last 12 months compared to 134 in 2019; a drop that probably reflects the measures that have curbed mobility among young people (distance learning, curfew).

Fatalities among young adults aged 18-24, at high risk of serious road accidents, have decreased by -17% in the last 12 months compared to 2019 (458 people killed compared to 549 in 2019), a trend that continues in this first half of 2021 with the curfew measures and the closure of some festive places.

Compared to other trends, cyclists fatalities have been increasing in recent months after a reduction at the beginning of the pandemic, and the result is on a sharp increase: 213 cyclists were killed in the last 12 months, +14% compared to 2019. Indeed,despite that the trips have been limited by the measures related to the health crisis, the French have shown a preference for using individual means of transport for short trips rather than public transport in towns, but also have developed leisure cycling in rural areas. 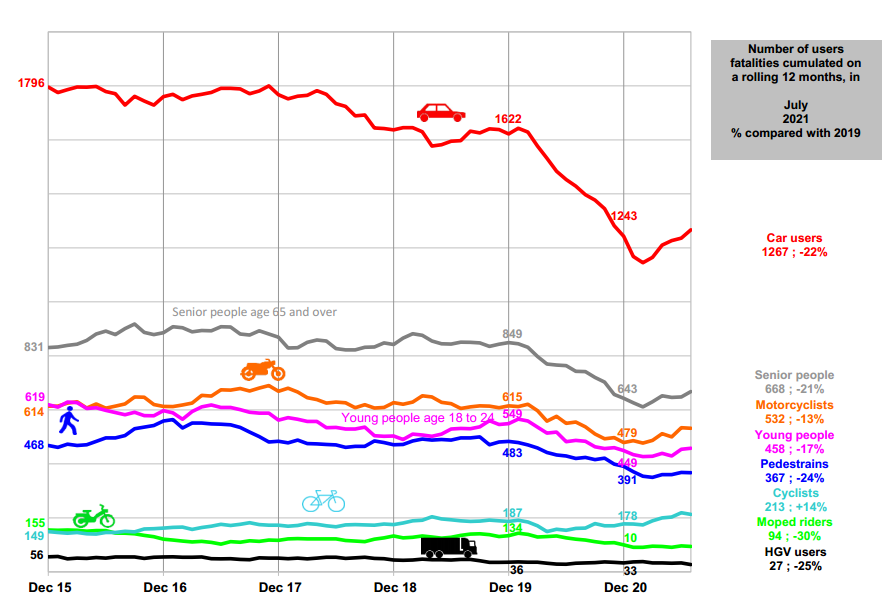 In July 2021, the road safety indicators for French overseas are higher than in July 2020 and in July 2019, except for the injured :