In March 2021, 185 fatalities occurred on the roads of mainland France and 22 overseas.

The current travel restrictions (10km limit for some departments and curfew for all) and the reduction in commuting (telecommuting) largely explain a road accident rate and accident severity lower than in previous March months, excluding the year 2020: the curfew would account for 3/4 of the mortality gain and the reduction in daytime travel for 1/4. It seems that the drop in traffic in March was less than in January: Cerema (traffic dataviz) estimates the drop in traffic to be around -10% in March 2021 compared to the beginning of March 2020 (before the start of the 1st curfew), a result similar to February, whereas the drop in traffic in January 2021 was more like -15% compared to January 2020.

On the other hand, motorcyclist fatalities, with 39 killed, increased slightly compared to March 2020 but remained lower than the average for the last ten years. 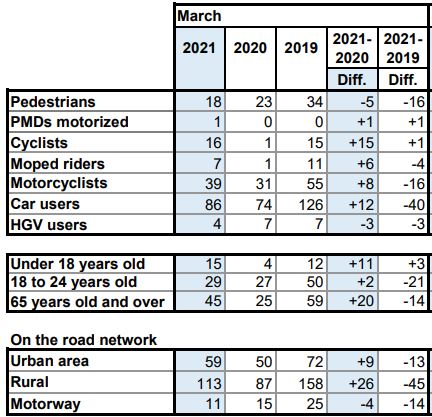 The health crisis has profoundly affected travel since March 2020, for all users, but to varying degrees according to the alternation of restrictions and authorized movements.

These very sharp declines are to be put in relation with the sharp drop in fatalities among seniors aged 65 or over, particularly those aged 75 or over, who have severely restricted their movements during lockdowns and curfew periods, but have also probably gone on holiday much less. Seniors account for half of all pedestrian fatalities and more than a quarter of all car users fatalities each year.

The fatalities of powered two-wheeler users are also declining: the drop among motorcyclists is -21%, with 487 killed in the last 12 months compared with 615 killed in 2019, but the trend has stabilised since the beginning of 2021. On the other hand, the drop in moped fatalities is particularly marked and continues, -30% compared to 2019, with 94 moped fatalities in the last 12 months compared to 134 in 2019; a drop which no doubt reflects the measures that have curbed mobility among young people (distance learning, curfews).

Fatalities among young adults aged 18-24, at high risk of serious road accidents, have decreased by 23% in the last 12 months compared to 2019 (424 killed compared to 545 in 2019), a trend which continues at the beginning of 2021 with the curfew measures and the closure of bars, restaurants and other festive places.

Compared to other trends, cyclists fatalities have been increasing in recents months after a reduction at the start of the pandemic, and the result is stable overall: 191 cyclists were killed in the last 12 months, i.e. -2% compared to 2019. Indeed, although travel has been limited by the measures linked to the health crisis, the French have shown a preference for using individual modes of transport for short journeys rather than public transport in towns, but have also developed leisure cycling in rural areas.

Finally, fatalities of heavy goods vehicle users are stable, as maintaining their activity remains essential for the daily life of French people and companies. However, it remains at a level that has been reduced by almost half in 10 years. 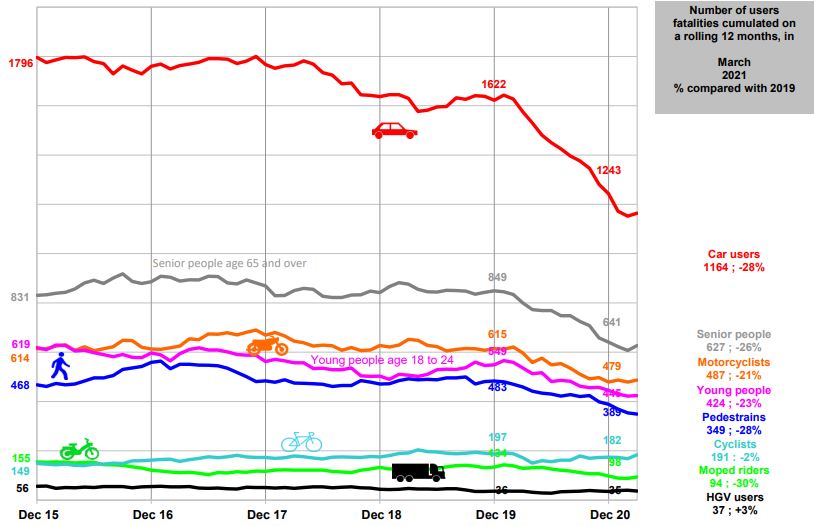