Update - September 2021
The specific characteristics of the territories have an impact on the type of mobility and thus on accident rates.

Statistical work carried out in 2011-2012 defined nine families of homogeneous départements for accident studies (eight families for the départements of mainland France and one family grouping together the overseas départements) on the basis of numerous variables such as the number of inhabitants, population density, traffic distribution according to the networks, the transit functions provided or not by the main roads as well as the socio-economic context and the climate. This classification makes it possible to compare each department with the other departments in its reference family, taking into account their dispersion. It thus makes it possible to better interpret the figures on the various maps presented elsewhere.

Description of the 9 families 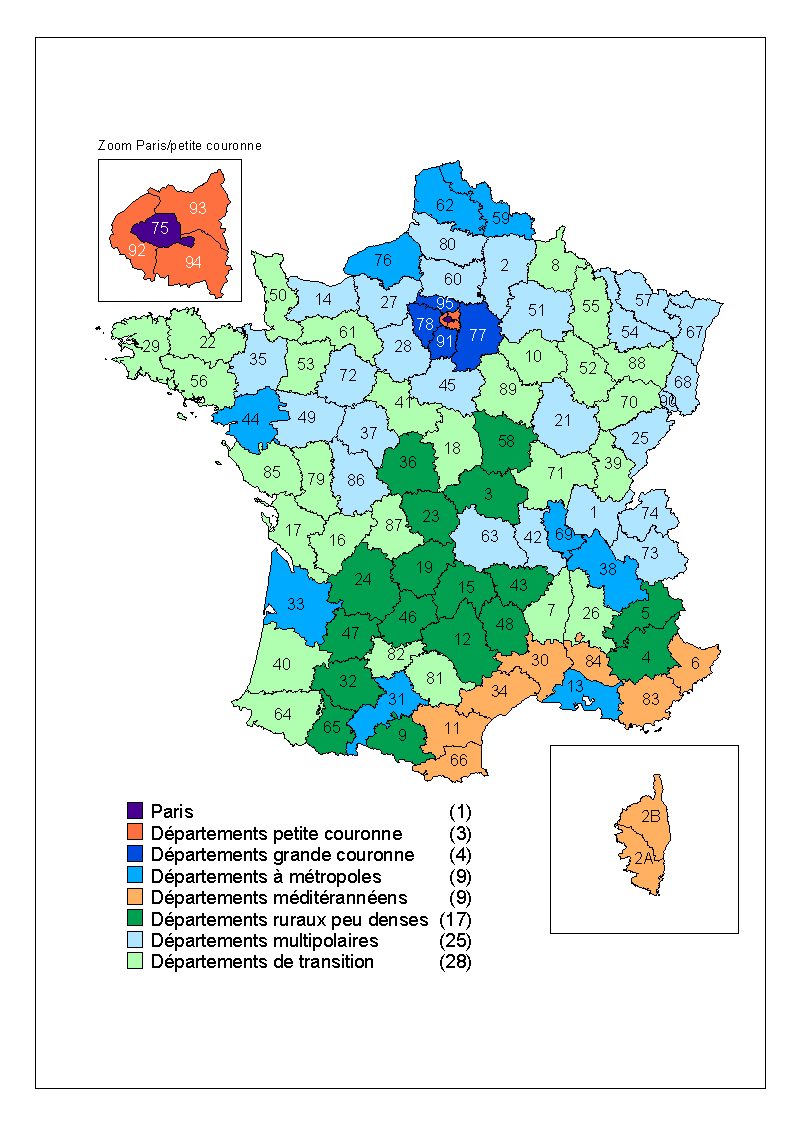 Family 2 (départements de petite couronne) is made up of the three départements of the inner suburbs of Paris, which stand out from the rest of the French metropolis because of their complete urbanisation and the intensity of traffic on their road network, despite the fact that the rate of household car ownership is much lower than in the rest of France, thanks to the availability of a substantial range of alternative transport.

Family 4 (departments with metropolitan areas) is characterised by predominantly urban departments organised around a large conurbation, with a fairly dense population that is on average rather young thanks to their universities and dynamic economy.

Family 5 (Mediterranean departments) is spread out along the Mediterranean coastline, with the exception of the Bouches-du-Rhône, where the sunny weather attracts considerable seasonal tourism in a region that is both coastal and mountainous. The resident population is on average older and makes significant use of motorbikes.

Family 6 (sparsely populated rural departments) differs from the rest of the departments in that its territory is predominantly rural and agricultural, with a low population density and a generally older population. It also includes the most mountainous departments.

Family 7 (multi-centre departments) comprises departments made up of medium-sized conurbations interspersed with predominantly rural areas. Buoyed by a fairly balanced population, its economic dynamism and its universities, it benefits indirectly from the major traffic flows between the capital and the major French and European conurbations by hosting some of the main roads.

Family 8 (transitional departments) presents departments that are balanced in terms of urban and rural areas, whose economic dynamism is based in particular on industry. Geographically located along the Atlantic coastline or inland, they experience significant camping tourism, but less mobility on their structuring network due to their distance from the major transit corridors. The rate of household car ownership is the highest and the population is only slightly older than the average for provincial departments.

To the seven families of departments determined by the statistical analysis, we should add the Paris department (family 1), which is too atypical to be included in the previous analysis, and the overseas territories, for which each department or territory, because of its geographical situation and culture, is specific and does not allow the same grouping method to be applied.