The annual average of the number of people killed per million inhabitants over 2019-2021 is generally higher in Overseas territories. While it is of 45 in France mainland, it is 48 in La Réunion and 78 in Martinique. This rate is of 143 in Guadeloupe, 108 in French Polynesia and of 120 in Guyana, i.e. higher than the highest rate in the countries of the European Union (92 in Romania ) but comparable to the United States ( 127 in 2019 ). With 171 killed per mil-lion inhabitants, New Caledonia has a rate that is significantly higher than that observed in the Euro-pean Union (46). For Mayotte, it is now of 43, with increasingly systematic recording of accident statis-tics. The rates observed in Saint-Pierre-et-Miquelon, Saint-Barthélemy, Saint-Martin and Wal-lis-et-Futuna are not significant. 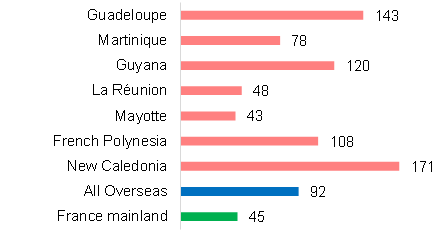 More particularly in Overseas Territories, there is an over-representation of 25-34 years old, whose mortality rate per million inhabitants is 3 times higher than that observed in France mainland. The mortality rate relative to the number of inhabitants for 25-34 years old is particularly high in New Caledonia (308) and to a lesser extent in Guadeloupe (257) and Guyana (232). The mortality rate for people aged 25 to 34 is up to twice as high as that of the entire population in Overseas territories, while the ratio is only of 1.3 in France mainland.

For those under 18, the mortality rate observed in overseas territories is of 29 people killed per million inhabitants, i.e. 2.5 times higher than that of France mainland where it is of 12. It reaches 53 in French Polynesia, 87 in New Caledonia and 34 in Guyana. 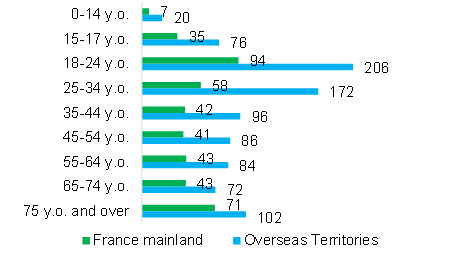