Publication on 12 September 2022 of the Road Safety Annual Report 2021, available here in French.

In 2021, 3,219 people were killed on French roads, in mainland France and overseas. This figure, 8% lower than in 2019, is historically low (excluding the atypical year 2020). The upturn in travel in 2021 was tempered by a period of confinement in April, curfews throughout the first half of the year, and several periods when working from home was strongly recommended.

In overseas counties, 183 people were killed.

In overseas collectivities and New Caledonia, 92 people were killed.

The main final results were published in May 2022 and the full report in September 2022.

In 2021, the public authorities have put in place national and/or local curfews. During these periods of restriction, travel, particularly for work or leisure, was greatly reduced. This reduction in travel during periods that are often at night, when serious accidents occur, has logically led to a reduction in fatal accidents, but has had a lesser effect on non-fatal accidents, which occur mainly during the day. 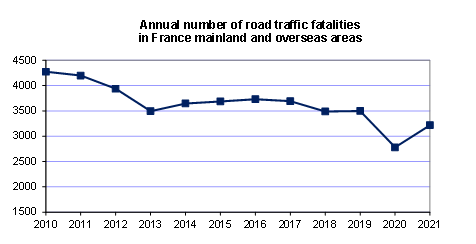 In a context still marked by the vagaries of the Covid-19 health crisis, road accident indicators in 2021 are historically low if the special year 2020 is excluded. Analyses will be conducted relatively to the pre-pandemic reference year, 2019.

The study of weekly changes in the number of accidents involving injured, which is closely linked to changes in traffic, show less marked inflections in 2021 than in 2020 during the April lockdown period. It thus seems that the traffic restrictions related to the health situation (curfew and confinement in the first half of 2021) had less impact in 2021 than in the previous year. 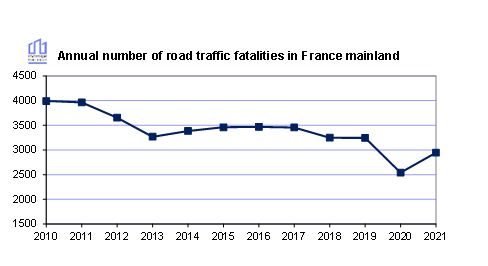 This is the lowest road mortality recorded since 1926, apart from the year 2020 which was heavily impacted by the traffic restrictions imposed by the management of the COVID 19 pandemic (road mortality in 1926: 2,900 deaths), while it can be estimated that the number of vehicles on the road has multiplied by 50. 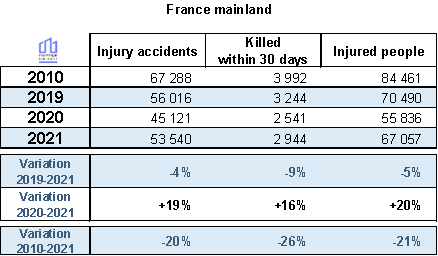 1,177 people died in accidents with no third party involved, including 736 car drivers, 248 motorised two-wheeler users, 78 commercial vehicle users, and 73 cyclists. They were drivers or passengers of a single vehicle involved in the accident.

An additional 33 fatalities among children and teenagers in 2021

83 children age 0-13 years died in 2021, 24 more than in 2019. The increase is shared between trips in passenger cars outside built-up areas and soft mobility modes (pedestrian, e-scooters, bicycle) in built-up areas. The number of children injured on kick scooters or e-scooters increases significantly in urban areas.

Contrasting results for senior citizens: gains in life only in the first semester 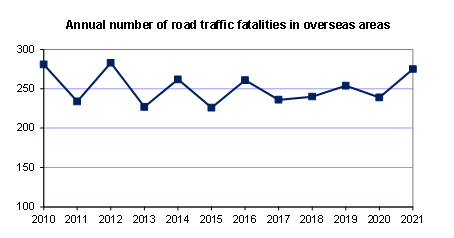 275 people died on the roads of the overseas territories in 2021, 183 in overseas counties and 92 in overseas collectivities or in New Caledonia. This is an increase of +8% (that is to say 21 more fatalities) compared to 2019 (reference year).

Pedestrian fatalities decrease in 2021 compared to 2019 with 48 pedestrians killed.

Senior fatalities for 65 years old and over are up by 10 fatalities to reach 38 fatalities in 2021. Seniors are still much less represented than in mainland France.