The full 2020 review is online! You can download it here.

2,780 people died on France's roads (metropolitan and overseas) in 2020. This figure, 21% fewer than in 2019, is historically low. This development is largely explained by the effects of the global Covid-19 pandemic.

In the overseas counties, 165 people were killed.

In the overseas territories and New Caledonia, 74 people were killed.

2,780 people died in 2020 on French roads, in mainland France or overseas territories. This figure, 21% lower than in 2019, is historically low. This evolution is largely explained by the effects of the global epidemic of Covid-19. Accidents are down -19% and injuries are down -20%.

The French government confined the population during two periods, from March 16 to May 10 and from October 30 to December 13. Outside these periods, national and/or local curfews were put in place. During these periods of restriction, business and tourist travel was greatly reduced, as shown by the decrease in household fuel consumption.

The evolution of weekly accidents in 2020 compared to 2019 follows the same trend as the amount of credit card fuel transactions. This amount of transactions, which represents household fuel consumption, allows us to identify the points of activity recovery related to thermal vehicle travel, particularly following the first end of lockdown in May 2020 as well as during the summer period. 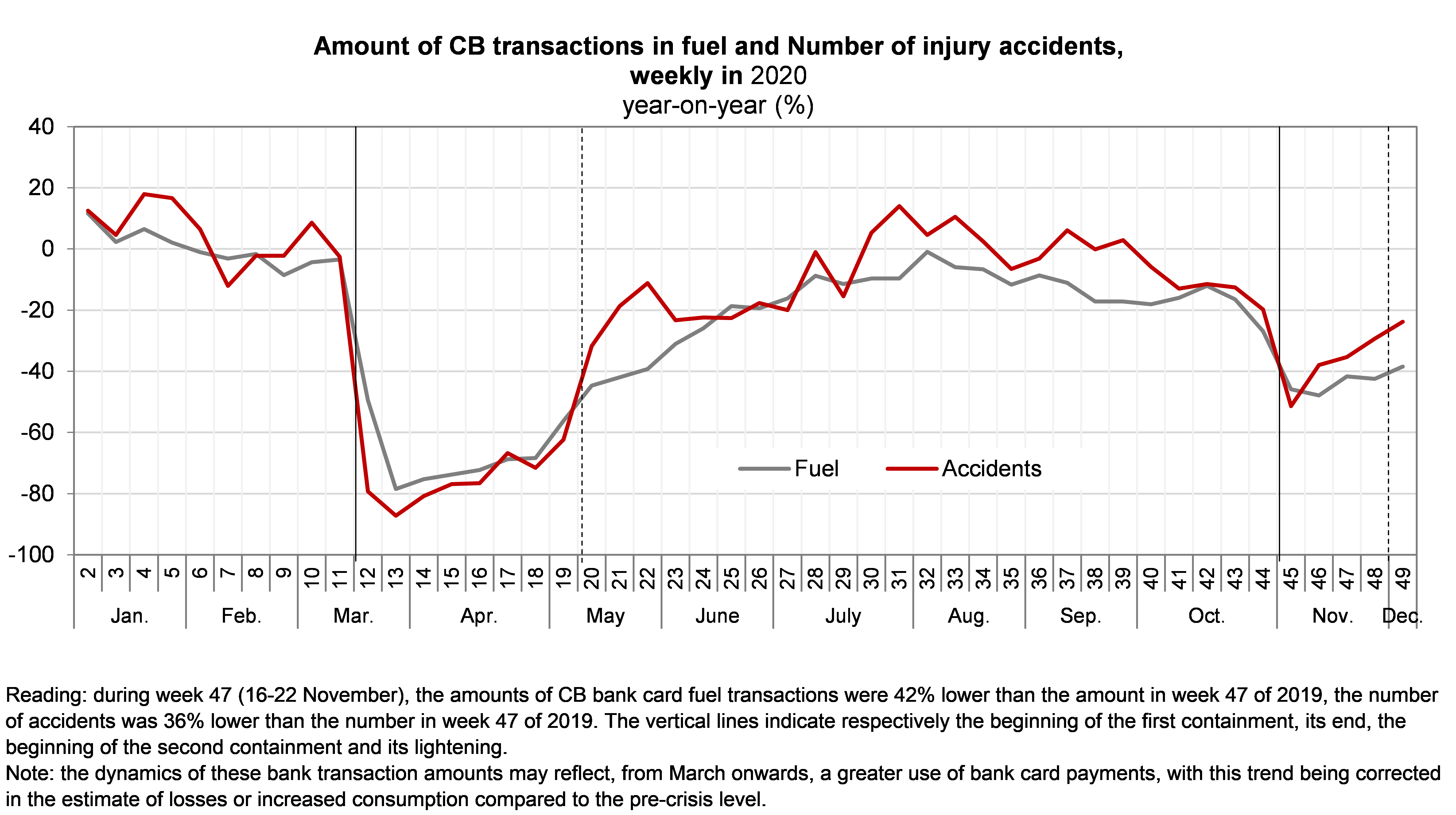 This reduction in travel logically had a positive effect on road accidents. 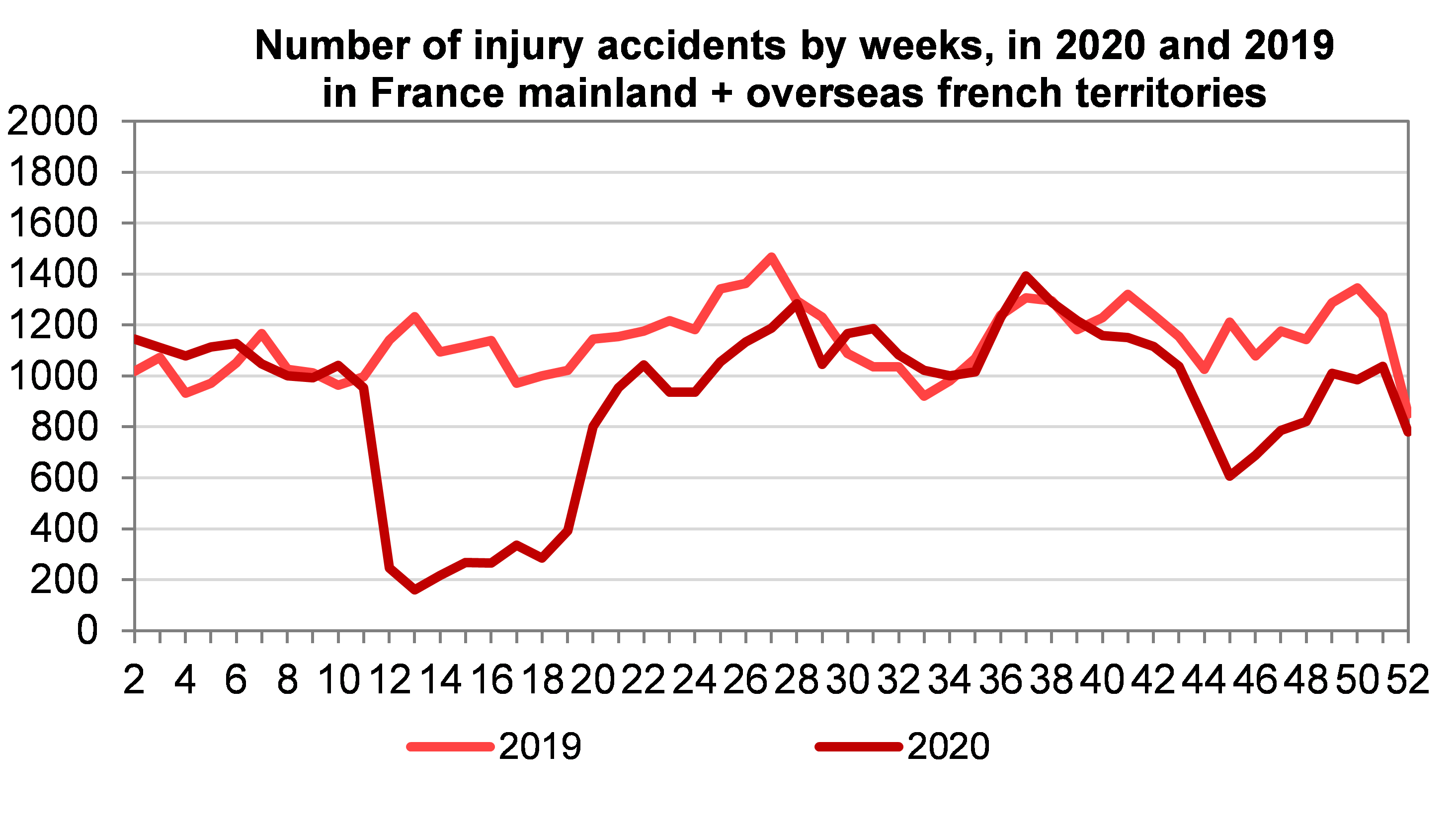 The interpretation of the impacts of the pandemic on road accidents is complex because, beyond the overall decrease in the number of kilometres travelled, the lockdowns and end of lockdowns have strongly influenced users ‘travel behaviours in several ways. For example, due to the rules of social distancing, many users have changed their modes of travel, especially in urban areas where individual modes (walking, scooters and other personal mobility devices, bicycles, motorized bicycles, and cars) have been favoured over public transport. 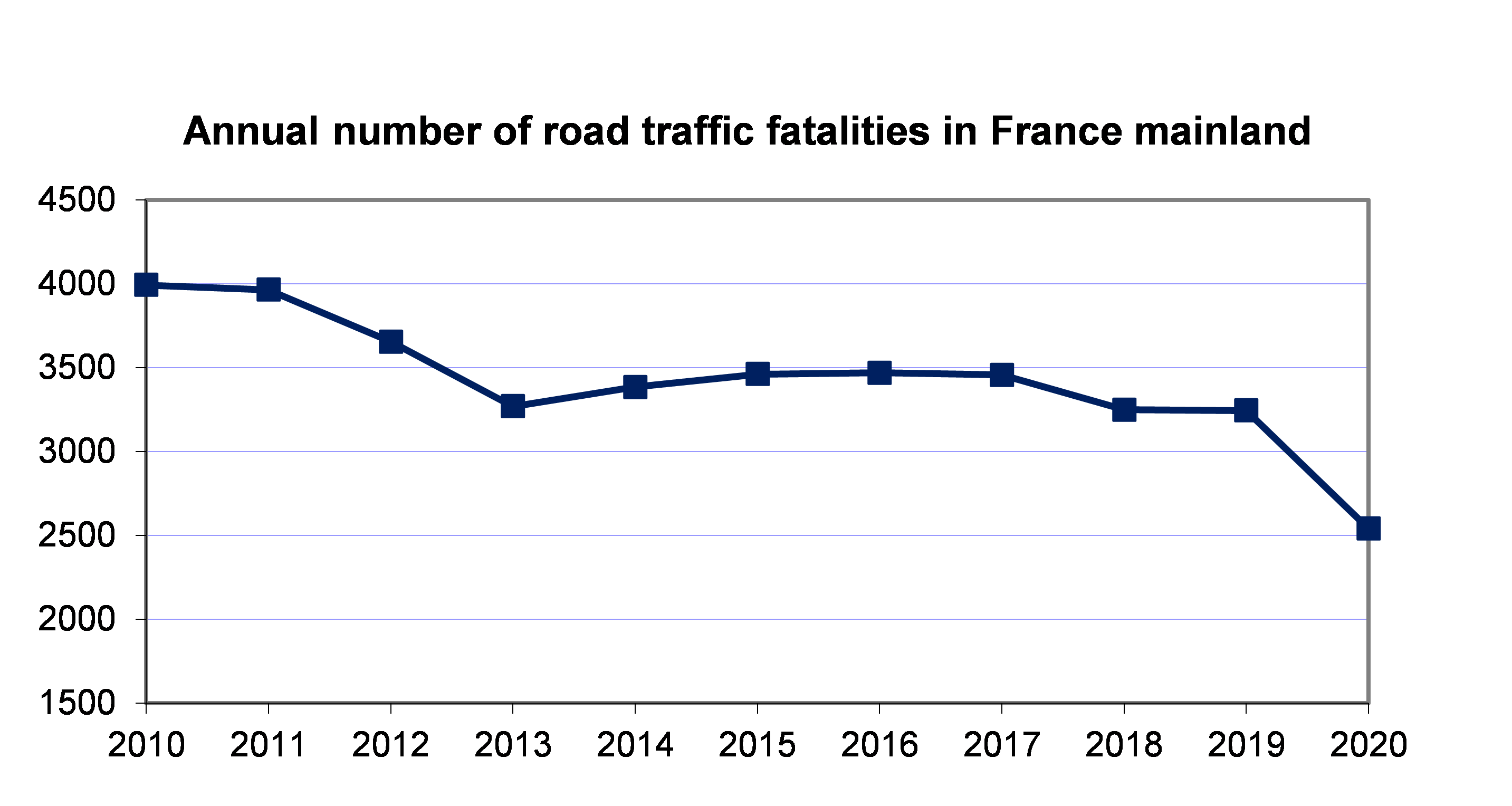 Due to the health crisis and the restrictions it imposed, long-distance travel was greatly reduced, and only daily or local travel was maintained or even increased. French people spent the summer in France and walking and cycling became more popular. The number of accidents fell by 19% and the number of injuries by 21%. 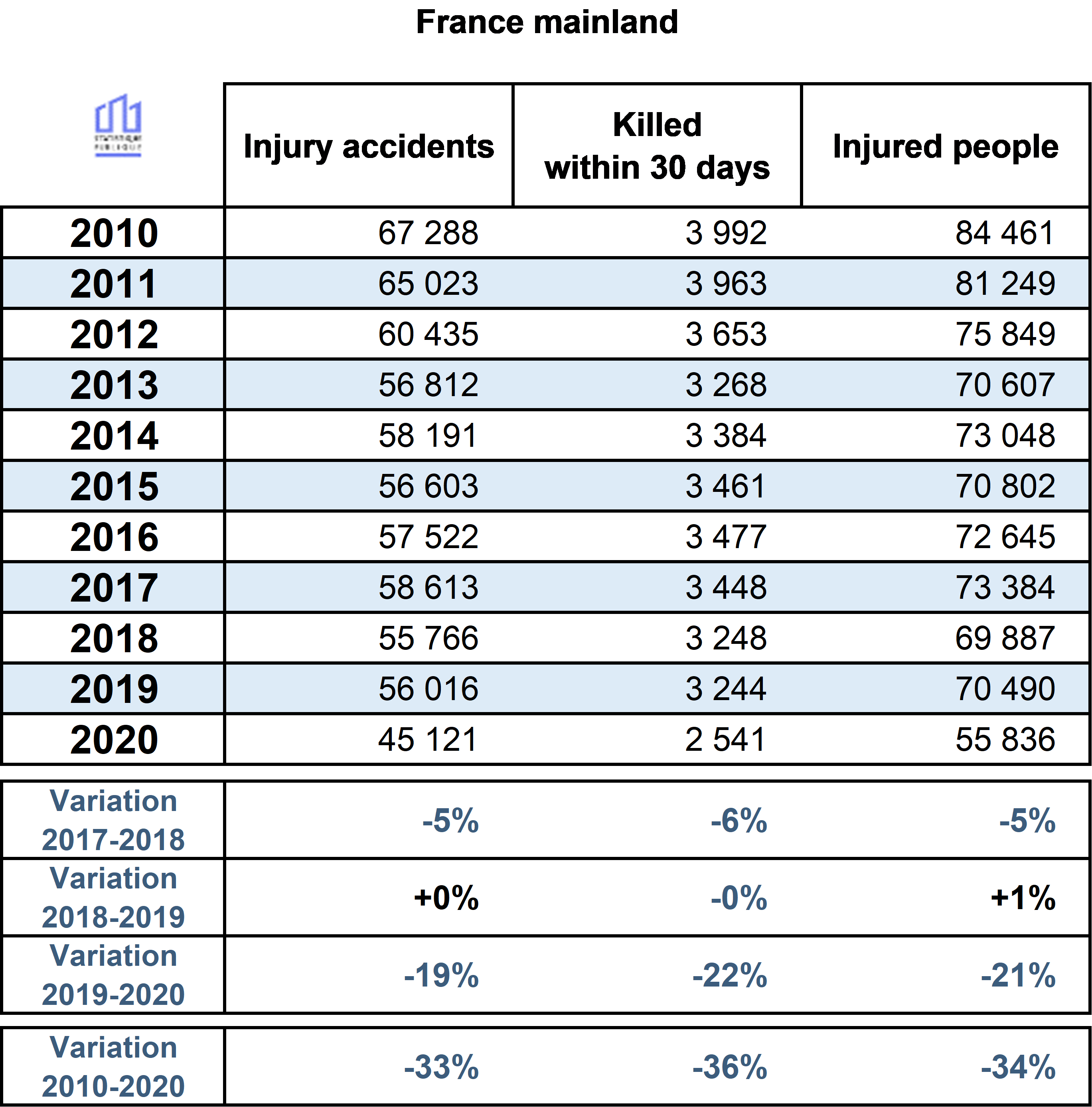 The impact of traffic evolution due to the pandemic is significant on motorist mortality : with 1,243 killed in 2020, it represents for the first time less than half of the total road mortality.

Mortality fell in particular among users aged 75 and over (-34%): the latter, for fear of being contaminated, severely limited their outings and gave up travelling, in addition to the imposed periods of lockdown. However, their death rate relative to their population remains higher (56 deaths per million inhabitants) than the average (29 deaths per million).

Pedestrian mortality (391 fatalities) are down (-19%), but this decrease is below average. More than half of these deaths occur each year among senior citizens aged 65 or more. In 2020, due to the health crisis, young seniors have shifted their habits to local leisure activities, particularly walking.

Bikers mortality (479 fatalities) fell like the average, due to the combined impact of the lockdown in the spring, usually a sign of the resumption of outings, and rainy weather in June and September.

On the other hand, cyclist mortality (178 killed) remained close to those of previous years: apart from downtime due to lockdowns, this mode of transport has developed in urban areas to avoid public transport and in rural areas to practice local leisure activities (+ 31% increase in cycling during periods when there are no lockdown in urban areas and + 15% in rural areas). There are more injuries in urban areas, but more fatalities outside urban areas due to the high speeds of other road users. 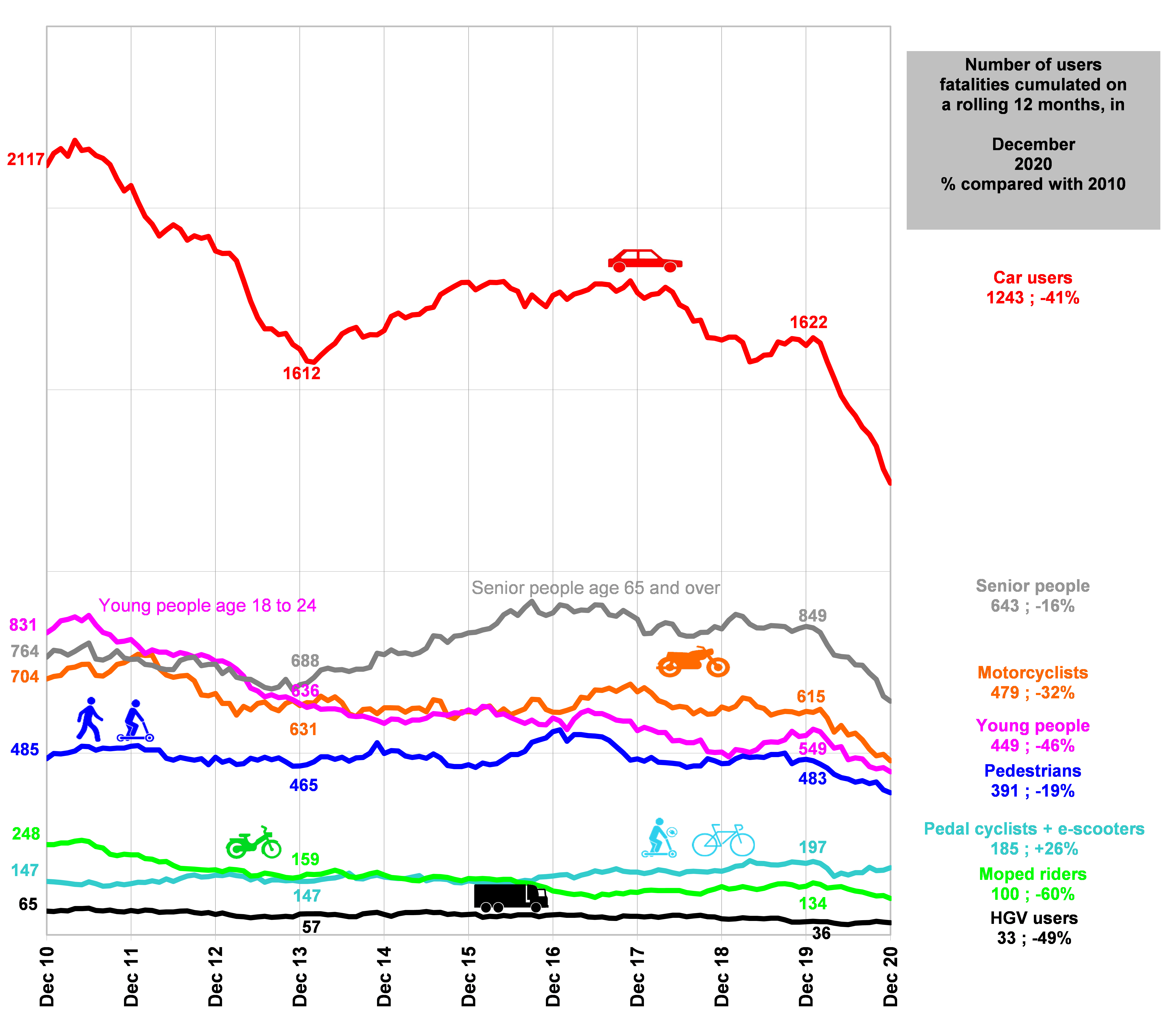 The number of fatalities by age and gender per 5-year age group indicates that the age groups most affected are still the youngest (between 15 and 34 years), with a peak between 20 and 24 years. The fatalities are mostly young men. However, in 2020 a second peak seems to be emerging between 50 and 54 years of age, also among men.

The year 2020 saw a fairly widespread increase in bicycle use. Including lockdown periods, there was an average increase of 10% in ridership. When we exclude lockdown periods, the increase rises to 27%. Depending on the area, the increase is 31% in urban areas, 14% in suburban areas and 15% in rural areas (source Vélo et territoires, Bicycle use dashboard "Bulletin fréquentation vélo numéro 13"). . This increase has many explanations, such as the desire to use a personal means of transportation instead of public transportation during this period of pandemic, the desire to practice a sport activity in a context of reduced opportunities to practice sports. In addition, one of the main reasons was the implementation of cycling facilities, initially called "temporary", and aiming to give more space to cyclists on the road, in particular by allocating to cycling some lanes formerly dedicated to cars.

The graph below shows the change in bicycle ridership and road accidents by week of 2020 compared to the same week of 2019.

While the number of male victims (killed or injured) on bicycles fell in 2020 by 3% compared to 2019, it remains equivalent to that observed in 2017 and 2018. However, there has been a shift in the age balance: fewer young people or young adults and more men aged 55 or over are injured, reflecting an increase in leisure activities outside built-up areas.

The number of female cyclist victims increased by 18% compared to 2019, a year equivalent to previous years. However, women are still in the minority in cycling accidents, accounting for 26% of victims in 2020 compared to 23% in 2019. This increase is mainly due to the 25-54 year-olds, whose number of injured cyclists rose by 30% compared to 2019. This phenomenon should be seen in relation to cycling in urban areas, which can be assumed to have increased significantly among women in 2020, particularly in the working age categories.

Road safety results in the regions of mainland France

In 2020, in mainland France, the number of fatalities decreased in all regions. The largest decrease is in the Centre-Val de Loire region (-32%); the number of fatalities in Corsica being small, its evolution is not significant.
The smallest decrease is in the Ile-de-France region (-7%), which is the only region whose national share of deaths in 2020 (10% of national deaths) is higher than in 2019 (8%).
The regions Auvergne-Rhône-Alpes and Occitanie contribute most to the decrease in mortality in 2020, with respectively 1/6 and 1/7 of share of decrease.
There is no evidence of a link between the regions most affected by COVID-19 and the regions with the smallest decrease in accident rates.

Overseas, 239 people died on the roads, which does not represent a significant change compared to previous years.

A single lockdown was implemented in all territories and the impact of the pandemic was not significant over the year. 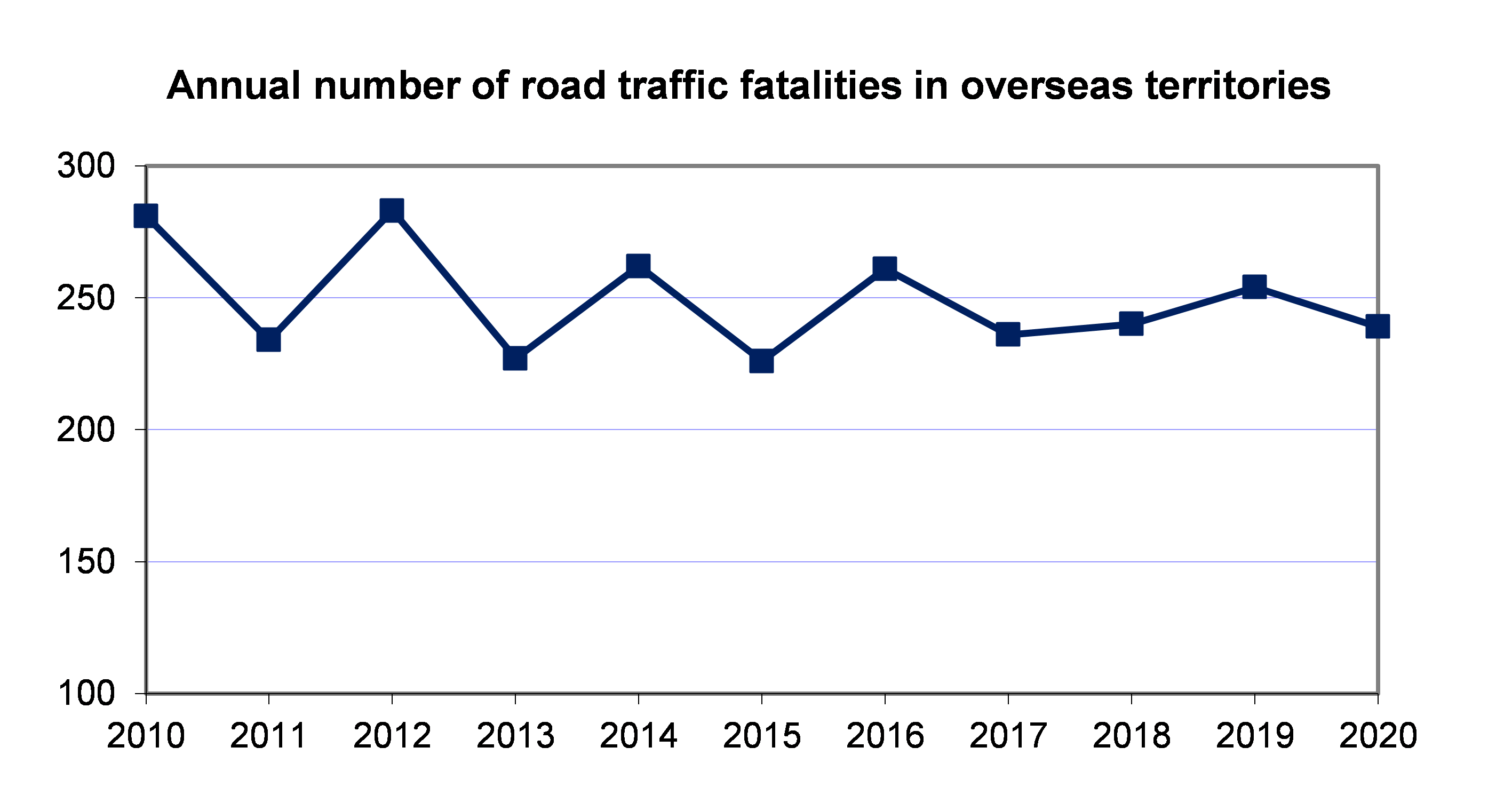 The impact of the health crisis on overseas counties is not as marked as in mainland France: Road deaths are falling but remain within the range of the last 10 years. 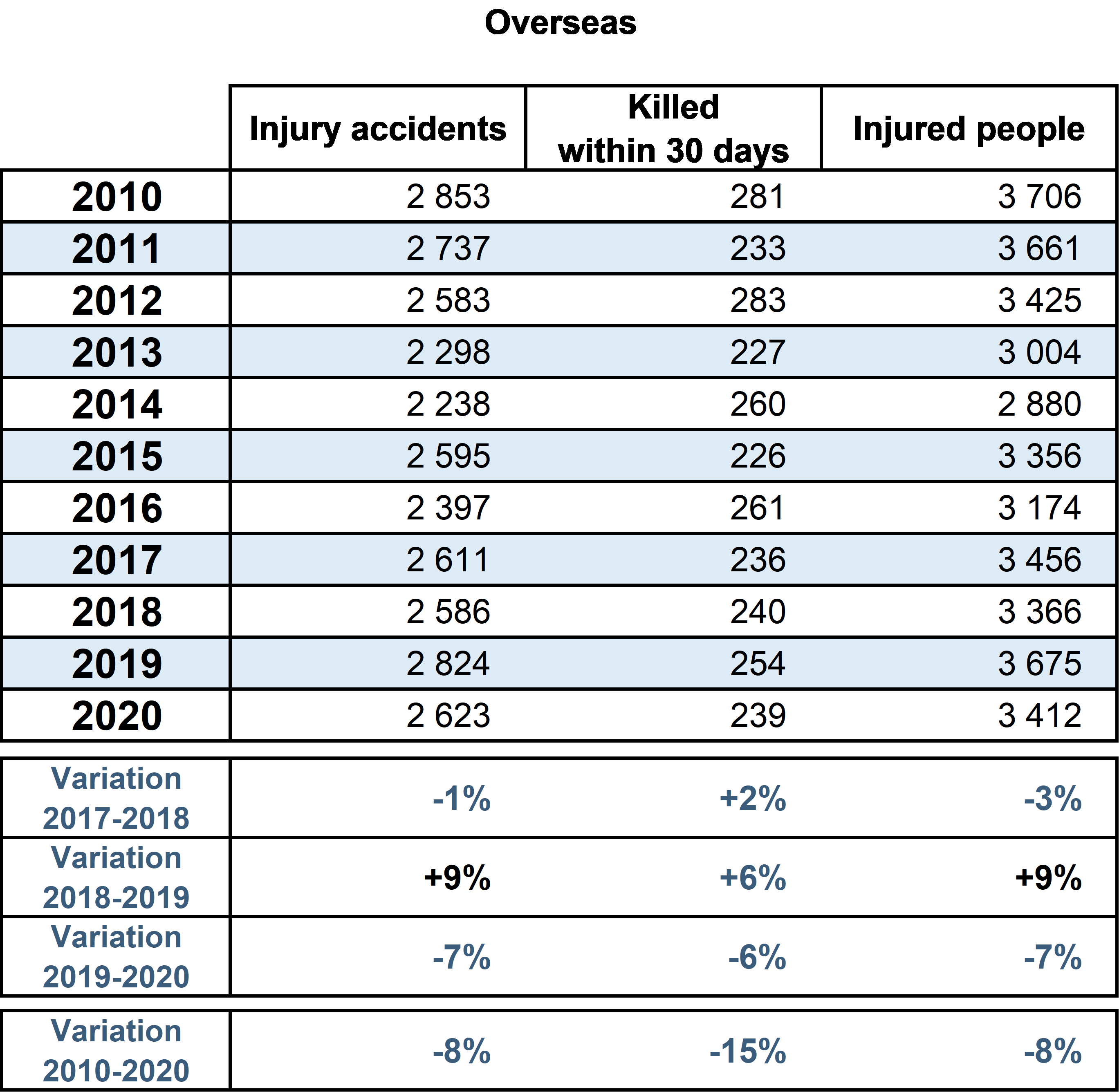 Motorised two-wheeler mortality increase again in 2020 with 87 users killed, i.e. a little more than a third of road deaths overseas.

Motorist mortality accounts for just over a third of road deaths overseas, with 86 fatalities.

Pedestrian mortality falls in 2020 with 36 pedestrians killed compared to 53 killed in 2019. 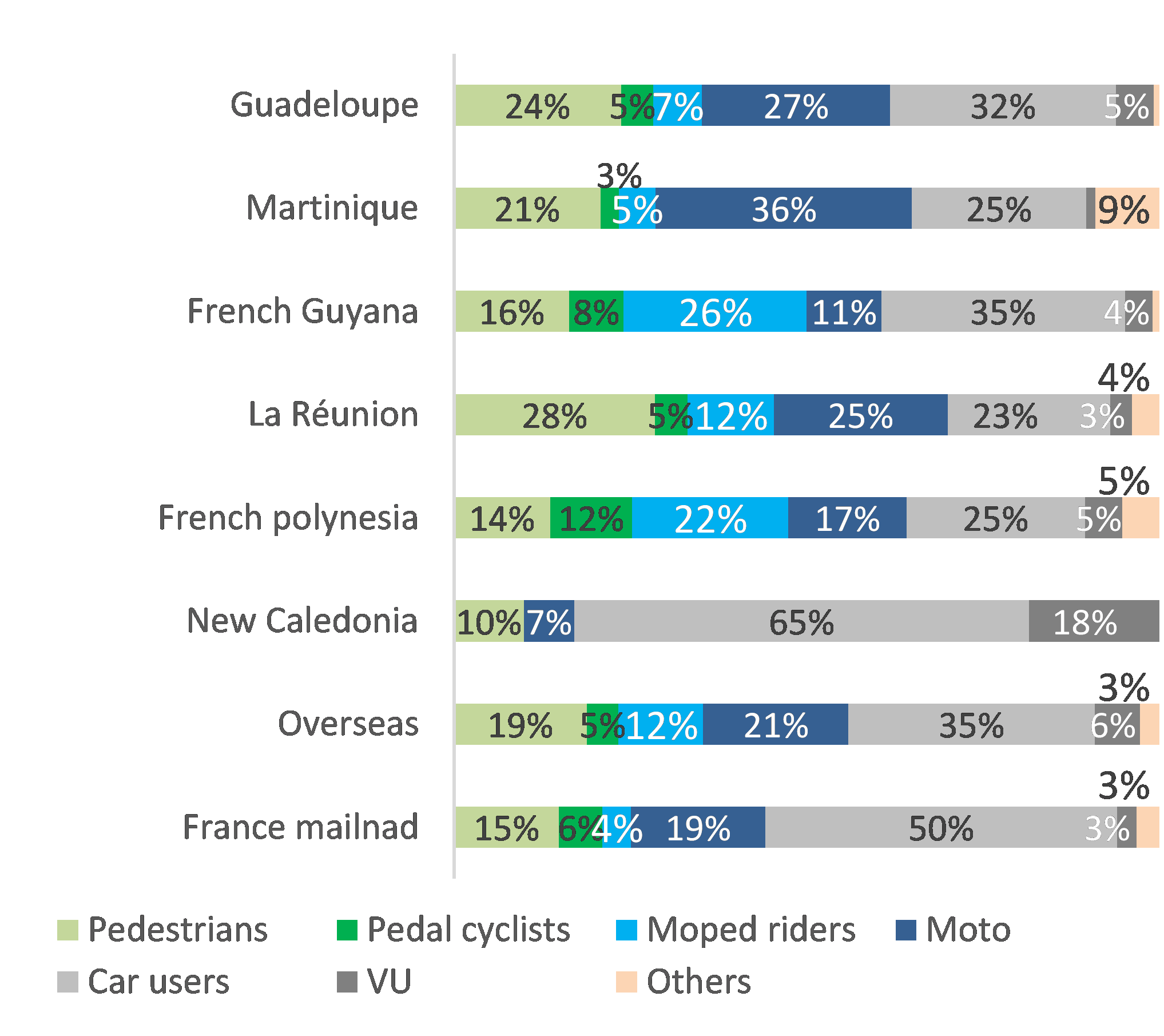 The year 2020 therefore presents results that break with previous years. This will require changing the way we analyse road safety trends both at national and local levels: