Effect of curfew in Q1 2021 during the COVID crisis

The travel restrictions linked to the curfew in particular have reduced road accidents. Unlike the first lockdown in 2020, the number of fatalities has fallen more than the number of injuries.

As part of the Covid 19 crisis management, a 6pm to 6am curfew was introduced in mainland France for most of the first quarter of 2021. Teleworking was still heavily used to reduce travel, restaurants, bars and nightclubs were closed for the whole period, and many shops were closed for part of the period. These measures had repercussions on economic activity, on the movement of the population, and above all on social outings at night. Road accidents were greatly reduced during curfew hours.

Since the beginning of 2021, accident rates remain below the January 2020 level, while traffic returns to the January 2020 level in the second half of February. Since the travel restrictions in March 2021, traffic has fallen again, but the number of speeding tickets does not follow the traffic trend and remains stable, suggesting more frequent speeding.

Mortality by mode of travel, by week, illustrates the effect of the curfew on pedestrian mortality, traditionally high in winter due to the commuting after dark. This year the curfew means that people have to go home while it is still light. Motorist deaths have fallen significantly, particularly because night-time outings are no longer authorised, but also because teleworking is still strongly promoted to reduce the spread of COVID, as shown by the Cerema traffic index. On the other hand, motorcyclist mortality is relatively equivalent to the average of previous years, excluding the health crisis.

What is the accident pattern in the first quarter of 2021?

With teleworking, the number of accidents decreases during the day. The curfew brings forward the evening peak.

Overall fatalities decreased by -29% in the period January to March 2021 compared to the average of the last 5 years before the health crisis. Motorist and pedestrian fatalities contribute most to the decrease (1/3 and 2/3 respectively). Motorcyclist deaths are stable (-4%). Cyclist deaths are increasing (+30%). 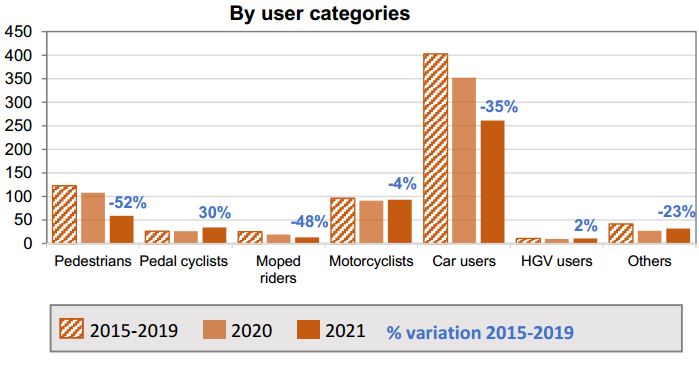 Cycling deaths on roads outside built-up areas are increasing 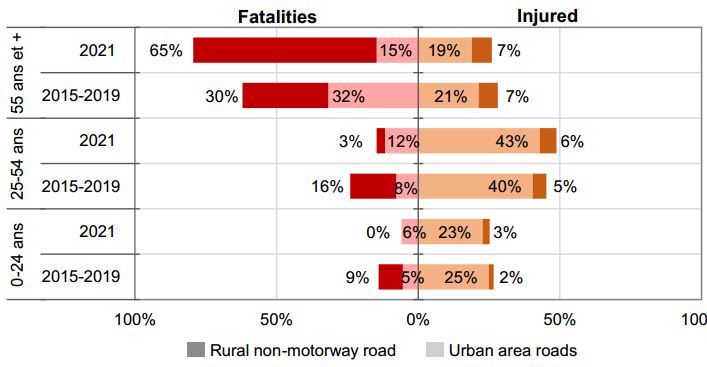 The health crisis linked to Covid-19 having led the government to take exceptional measures to restrict travel and activities, the evolution of road accidents since March 2020 reflects the impact of the measures and the way in which the French have adapted their mobility according to the period.

A curfew is in place in mainland France for the whole of the first quarter of 2021 and teleworking is strongly recommended. In addition, from 20 March 2021, in 16 and then 19 French counties, travel is limited to 10 km (30 km for shopping) around the place of residence.