Effect of curfew in Q2 2021 during the COVID crisis

As part of the health crisis linked to Covid-19, in metropolitan France, from 3 April to 2 May, travel is limited to 10 km. From 3 May, a curfew was introduced from 7pm to 6am, reduced from 9pm to 6am from 19 May, then from 11pm to 6am from 9 June and since 20 June there is no longer a curfew in mainland France.

In April 2021, during the trips restrictions, traffic drops again, but the number of speed violation messages (MIF) does not follow the traffic trend and remains stable, suggesting more frequent speed violation. From May onwards, traffic and the number of MIFs continue to increase, and accident rates also start to rise again, with a peak in mid-June (+40% compared to the pre-crisis reference)

Fatalities by mode of travel, by week, illustrate the effect of the curfew on pedestrian fatalities, which are relatively low at the beginning of the second quarter during the travel restriction, and are then equivalent to those of previous years. This year the curfew forces people to return home while it is still light. Car deaths remain low because night-time outings are no longer authorised but also because teleworking is still strongly promoted to reduce the spread of COVID, as shown by the Cerema traffic index. On the other hand, motorcyclist fatalities are relatively equivalent to, or even higher than, the average for previous years, excluding the health crisis.

What is the accident pattern in the first quarter of 2021?

Despite teleworking, the number of accidents and victims are equivalent to previous years during the day and evening, only the morning peak is slightly lower in the second quarter of 2021.

Overall fatalities fall by -28% in the period April to June 2021 compared to the average of the last 5 years. Motorists and motorcyclists deaths contribute most to the decrease (2/3 and 1/6 respectively). Pedestrian fatalities remain lower than the 2015-2019 average (-31%). Cyclist fatalities are increasing (+16%). 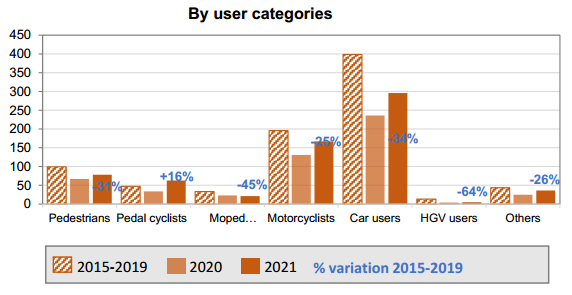 Cycling deaths on roads outside built-up areas are increasing

The health crisis linked to Covid-19 having led the government to take exceptional measures to restrict travel and activities, the evolution of road accidents since March 2020 reflects the impact of the measures and the way in which the French have adapted their mobility according to the period.

A curfew has been introduced in mainland France for the first half of 2021 and teleworking is strongly recommended. The starting time of the curfew is postponed from 9 p.m. to 11 p.m. on 9 June 2021 and then lifted on 20 June 2021.