From the post-war period to the present day, around 700,000 people have been killed on French roads.

The improvement of road safety results from action taken on three fundamental and inseparable levers:

Better post-crash care for the wounded and medical progress complete the system.

Historically, road accidents rose sharply from the beginning of the 1950s in direct relation to the expansion of the number of vehicles, the fact that road networks had not been adapted and insufficient driver training. The first precise statistical census goes back to 1954 with 7,166 persons killed in three days. No real public policy had then addressed road safety issues. From 1960, campaigns were launched for dealing with the black areas. Between 1960 and 1970, fatalities rose by 55.7% and traffic was multiplied by 2.3 times. The number of persons killed per billion km driven went from 111 to 80. 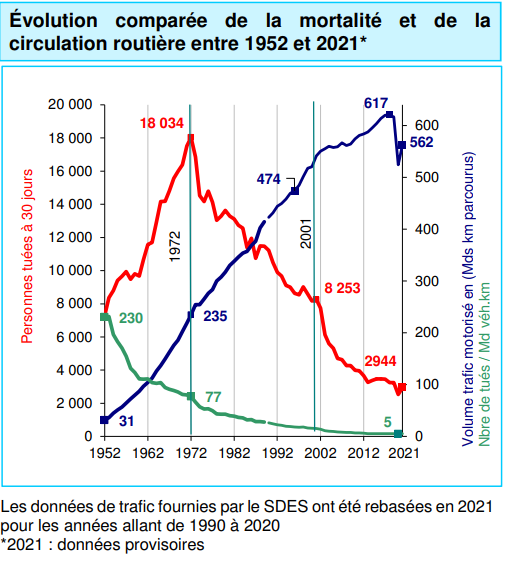 At the beginning of the 1970s, the Interministerial Committee for Road Safety was created. A ministerial Director was appointed to implement the road safety policy. The operation “Mazamet dead city”, when the 16,000 inhabitants lay down on the ground to represent the road fatalities, served as a collective eye-opener. The Government introduced speed limits, the obligation for drivers and front seat passengers to wear seat belts and helmets for motorcyclists. The dynamics connecting vehicle mobility and accidents was being checked: road fatalities peaked in 1972 with 16,545 fatalities within six days after the accident or over 18,000 fatalities within 30 days. Deaths were down 30% in 10 years. Overall traffic multiplied by a factor of 1.6. The number of persons killed per billion km driven for all vehicles went from 80 to 43.

The beginning of the 1980s saw a stabilization of the low fatality rate. The introduction of the departmental road safety plans and the programme REAGIR were the start of the local road safety policy in response to the accident in Beaune, which cost 53 lives, 44 of them children. This policy made it possible to break through the symbolic level of 10,000 fatalities per year but the reduction was slow and irregular. The maximum blood alcohol concentration level was lowered from 1.2 to 0.8 g/l of alcohol in the blood. Most vehicles were ftted with anti-lock brakes. Priority at roundabouts notably reduces the number of fatal accidents at these junctions2. Deaths were down by 20% in 10 years though there was 1.4 times as much traffc globally. The number of persons killed per billion of km covered went from 43 to 26.

In 1989 the publication of the white paper on road safety paved the way for future road safety policies : the improvement of enforcement with automated controls which would see the light 10 years later. In 1990, the maximal speed permitted in built-up areas was set at 50 km/h. The maximum blood alcohol concentration level was lowered to 0.5 g/l. The demerit point system was introduced in 1992. The essential work on the motorway network was achieved. Most vehicles were equipped with airbags. The educational continuum was implemented. Despite these measures, fatalities decreased by only 20%. At the same time, the overall traffc went up by 20%. The number of persons killed per billion km covered was 15 in 2000.

In July 2002, road safety became one of the President of the Republic’s top four priorities. The first permanent automated speed cameras were introduced in 2003. The National Council for Road Safety was set up. Probationary licences were introduced in 2004. A driver caught exceeding the maximum blood concentration level would lose six points.

There were fewer than 5,000 deaths in 2006 and a 51% reduction in mortality over the decade. More than 30,000 lives were saved during this period, three-quarters of them thanks to lower speeds and 11% thanks to improved fleet safety. The number of deaths per billion km travelled in 2010 was 7.1. Traffic only increased by +7% since 2000.

Road safety remains a priority policy. The objective set by the European Union to halve road deaths between 2010 and 2020 has been taken up by France, with the aim of falling below 2,000 deaths in 2020. However, like other European countries, France saw its road deaths increase in 2014 and 2015 and then stabilise in 2016 and 2017. With the acceleration of the ageing of the population since 2010, the share of senior citizens in the mortality rate is constantly increasing, while the excess risk of 18-24 year olds is decreasing more than that of other adults. The measures of the various plans and inter-ministerial road safety committees (CISR) have made it possible to significantly reduce mortality in 2018 and 2019. The year 2020 is an exception in view of the health context: after rebasing the traffic by the Ministry of Ecological Transition (SDES 2020), there are 5.0 deaths per billion kilometres travelled. The European Union now plans to halve the number of deaths and serious injuries by 2030 (taking 2019, before the pandemic, as the reference year). In 2021, another special year in terms of health measures that have had an impact on the mobility of the accident rate has evolved with the evolution of behaviors (development of certain modes of travel). of travel). There were 5.2 fatalities per billion kilometers traveled. France adheres to the European objectives of halving the number of deaths and serious killed and seriously injured by 2030 (taking 2019 as the reference year, before the 2019 as the reference year, before the pandemic).