In 2021, work-related trips (home-to-work or work trip) account for 19% of road deaths where the motive for travel is known.

Road risk is the leading cause of work-related mortality and leads to 6 million sick leaves, a cost for companies of 725 million euros (CNAMTS, White Paper, 2012).

38% of injury accidents involve at least one user travelling from home to work or work.

In 2021, 454 people were killed during a work-related trip (19% of deaths where information on the reason for travel is provided) :

67% of people killed in the workplace are killed on roads outside urban areas.

The proportion of people killed in urban areas seems to be lower during work-related journeys than during other types of journeys, but the return journey, if not direct, can be recorded as shopping or leisure. 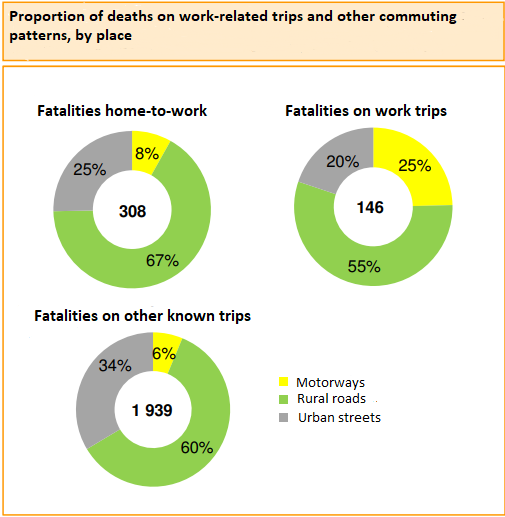 37% of people killed on the commute to work were on powered two-wheelers.

50% of people killed during a commuting trip are killed in passenger cars or utility vehicles. 37% use PTW (107 deaths) while this mode is used in only 2% of home-to-work journeys. Public transport (including rail) accounts for 15% of commuting, for no user killed in 2021 during these journeys.

Half of the people killed during a business trip were killed in heavy goods vehicles (28 people) or utility vehicles (15 people). 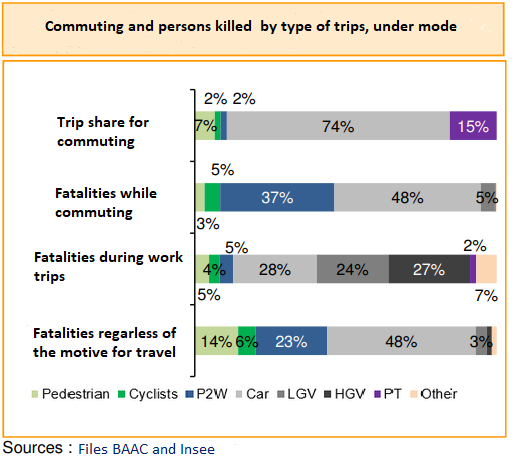 20% of those killed while commuting were between 15 and 24 years old.

Some differences between men and women may partly explain this over-representation: for commuting, modal practices are very different according to sex: men use PTW five times more than women, who use Public Transport more often or walk; women are a minority in some jobs that have a higher exposure to road risk, for example in construction or among professional drivers (they represent only 10% of the workforce). On the other hand, women are more present in certain sectors such as health, with staggered working hours that expose them more strongly to road risk.