Parc Auto is the annual reference study for more than 30 years on the French household car fleet conducted by Kantar TNS between March and April 2020 through two questionnaires with 10,000 households representative of the French population, which provides information on both the motorization rate of the vehicle fleet and their characteristics, equipment level, usage behaviour and user profile.

Parc Auto is the annual benchmark study on the French household car fleet Kantar TNS (formerly TNS Sofres) which includes two questionnaires ("Your household and the car" and "You and the car") with 10,000 households representing the French population.

The number of vehicles available to households is estimated at 36.09 million on 1 January 2020.  It is continuing the growth that began four years ago, fuelled in particular by an increase in the multi-car rate (proportion of households with at least two cars) of 6 points in five years, while the rate of households owning a car has fallen by 4 points.

The rate of car ownership, estimated at 86%, is still on the rise (+0.2 points in 2019) after a decline observed between 2011 and 2015. Car ownership peaks among heads of household aged between 55 and 64 and among the most affluent households.

The smaller the agglomeration, the higher the rate of car ownership and multiple car ownership. Multi-motorisation has increased over the past 10 years in all areas but has remained stable since 2016.

For non-motorised households, the reasons given are essentially that they do not have a driving licence and that they have no real need.

The share of new vehicles remains stable. Second-hand vehicles (20.9 million) account for 58% of the fleet and 64% of cars purchased in 2019. The average age of petrol vehicles continues to fall and is now lower than that of diesel vehicles (8.6 years versus 9.2 years).

Among the range levels, the share of the 4x4 SUV (Sport Utility Vehicle) segment continues to increase in 2019 (+2 points). Its weight in the fleet has increased from 2% to 15% in 9 years. This increase has led to a significant drop in the weight of the M2 (medium saloon) and H (large saloon) segments. 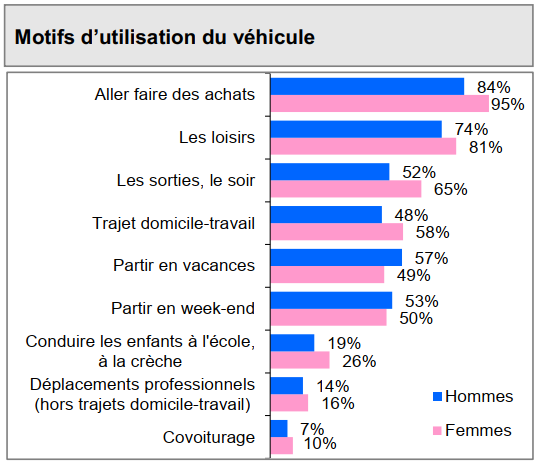 Nearly a quarter of the main users are aged 65 or over, although this category accounts for only 18% of the kilometres travelled.

Nearly 4 out of 10 vehicles are used by occasional drivers, but around 70% of them do less than a quarter of the total mileage of the vehicle: the car remains a very 'personal' asset that is difficult to share.