In October 2022, the ONISR published a study on the observation of traffic speeds in 2021: speeds are increasing on almost all networks, with the exception of city centre arteries.nts that feed it. It should be noted that there are breaks in the series linked to the change in methodology between 2019 and 2020.

Summary of the results for 2021

The average speed of passenger vehicles measured during the day on 2x2 or 2x3 lane networks has been re-evaluated downwards (+1.1 km/h on connecting freeways and  on 2x2 lane roads).

In general, the following trends are observed:

Average speeds of passenger vehicles and rates of exceeding the MAS in 2020 by type of network: 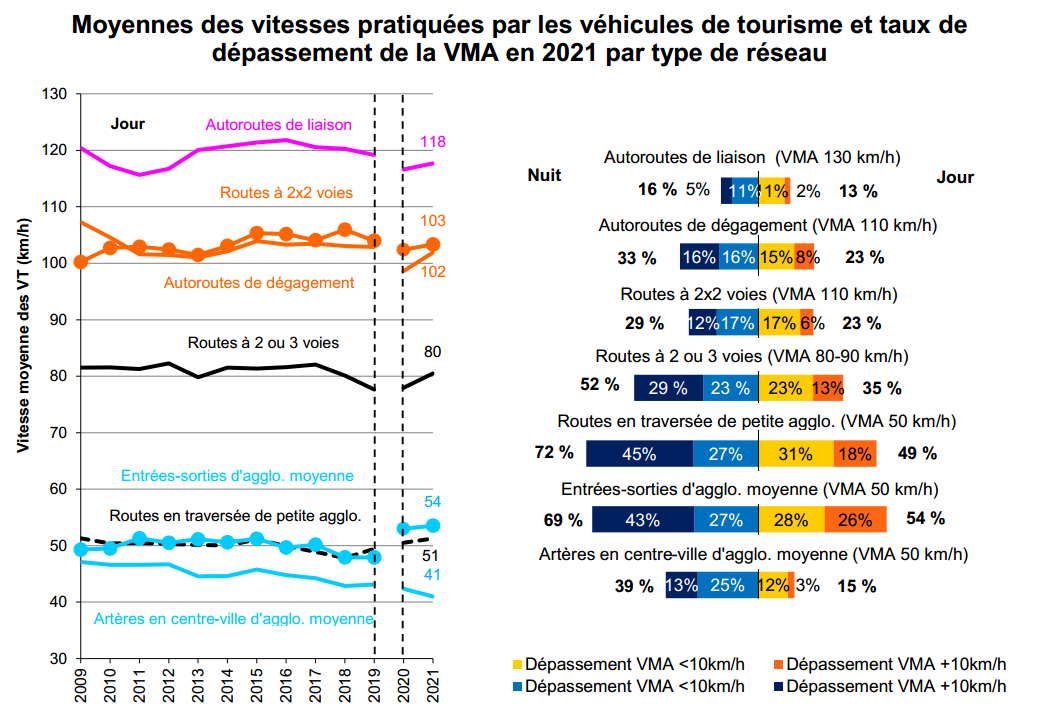 The full report and previous reports can be downloaded at the top right of the page (an english version is sometimes avalaible too).

In addition to the speed observatory, you will find the article from the behaviour observatory.

Comparisons of the results for the year 2021 with those for the year 2020 should be made with a certain amount of distance due to the impossibility of carrying out part of the measurements normally carried out during the first wave of the year 2020, this being linked to the Covid-19 pandemic. The 2*2 and 2*3 lane networks were particularly affected (the evolution of speeds on dual carriageways should be compared with 2019 rather than 2020).

The speeds measured by the observatory do not claim to be absolutely representative of traffic on the entire French road network. However, it is considered that their evolution over time is representative of the general evolution of behaviour, in other words that these observations are relatively representative, provided that the panel of observation points is stable over time. The results of the speed observatory are therefore intrinsically linked to the panel of measurement points that feed it. It should be noted that there are breaks in the series linked to the change in methodology between 2019 and 2020.