Road mortality varies over the year.

Motorcycle mortality triples in the summer.

Road mortality varies according to the month of the year, and according to the category of users. Just as travel is often seasonally related, so too is the accidental nature of certain categories of users. The graph below shows the average share of fatalities over 10 years for all road users, motorists, motorcyclists and pedestrians. Usually, the curve of motorcyclist mortality is strongly impacted by leisure trips, which are themselves linked to the summer season: their average mortality in summer (June to August) is three times higher than in winter (December to February). In 2020, however, the first lockdown (April-May) combined with the bad weather conditions during the summer period, induced a moderation of motorized two-wheeler mortality (208 killed from June to August 2020 against 262 in 2019).

Winter is a time of major pedestrian accidents

Conversely, pedestrian fatalities usually peak in autumn/winter: the night period lasts longer and ultimately includes the morning and evening peak full stops, when pedestrians are less visible to other road users at night. The health context in 2020 has led to a strong decrease in pedestrian fatalities (-19%), mainly concentrated in the two confinement periods.

Mortality increases when the weather is fine

On the other hand, deteriorated weather conditions can increase the individual risk of accidents for each user (visibility, loss of grip in case of rain, ice, etc.). It is therefore generally difficult to identify the influence of weather conditions on monthly mortality outside the most extreme variations.

2020 is considered the warmest year since the beginning of the 20th century. It was characterised by generous sunshine and predominantly mild weather throughout the year. Rainfall was not deficient overall, but was unevenly distributed geographically: the Atlantic and the eastern Pyrenees had a surplus, while the north-eastern quarter had a deficit.

Changes in fuel costs have an impact on mobility. When prices increase by 1%, fuel consumption decreases in the short term by between 0.25% and 0.35%. On a rolling year-to-date basis, after a very slight decrease during 2013, fuel delivery volumes increased by around +2.7% between the beginning of 2014 and the end of 2017. However, it appears from the histories published by the SDES that fuel consumption cannot in the long term be directly linked to road traffic.

What about the correlation between fuel consumption and accidents then ? The situation in 2020 (admittedly atypical) shows that these two variables are closely linked. This is all the more striking with the first lockdown, where we see a drop both in fuel transactions and accident rates. This period had indeed known a considerable reduction in traffic. The correlation is also visible over the rest of the year, where the variables follow the same trend. However, it is difficult to establish a more genetal link between fuel consumption and accidentality from an atypical year like 2020.

Evolution of fuel-buying transactions and accidents, per week 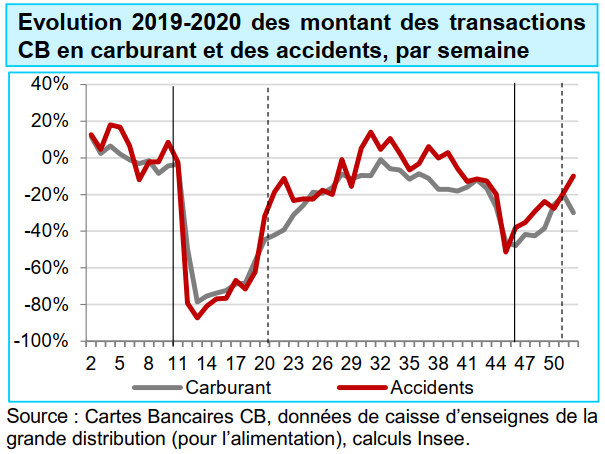 A recent international analysis has shown a correlation between mortality trends and two economic indicators such as GDP and unemployment rates. A reduction in economic activity is accompanied by a decrease in road deaths and vice versa. According to INSEE, GDP in 2017 increased by +2.8% compared to 2016.