In 2020, the Ile-de-France region (19% of the metropolitan population) will account for 32% of accidents and 31% of injuries but only 10% of deaths.
Mortality per million inhabitants in the regions in 2020: sharp drop linked to the pandemic

The number of people killed per million inhabitants in 2020 is 39 in mainland France and varies according to the region between 20 in Île-de-France and 59 in Bourgogne-Franche-Comté. Severity (number of deaths per 100 injured) also varies:

Between the average for the period 2015-2019 and 2020, mortality as a proportion of the population has fallen in all regions. For many, the decrease is close to the national decrease (-25%). The regions of Corsica and Centre-Val de Loire have experienced larger decreases (-47% and -37%) and the regions of Île-de-France and Normandy smaller decreases (-19%). 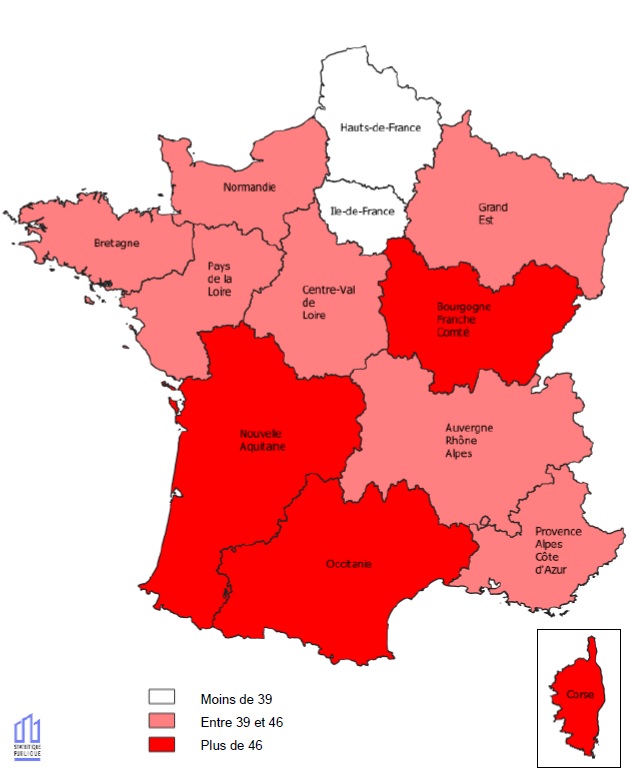 Types of accidents in the regions

As mobility practices differ from one region to another, the distribution of people killed by mode of travel varies greatly:

The share of pedestrians among those killed is 15% in France and varies from 9% in New Aquitaine to 27% in Île-de-France.
The proportion of cyclists among those killed is 7%. It varies from 4% in Bourgogne-Franche-Comté, Centre-Val de Loire and Normandy to 12% in Brittany. Of the 17 people killed in Corsica in 2020, none were on a bicycle.
Motorcycle users account for 23% of deaths. They are strongly represented among those killed in Corsica, PACA and Île-de-France (41%, 38% and 29% respectively). These three regions account for 29% of motorcycle users killed in mainland France.
Motorcycles are strongly represented (34%) among people killed during a home-work journey: 4 out of 10 people in Bourgogne-Franche-Comté, Ile-de-France and Normandy and up to 67% in PACA.

Alcohol or drugs are involved in 43% of deaths (stable compared to 2015-2019), with some regions more heavily affected (57% in Corsica and around 50% in Pays-de-la-Loire, Hauts-de-France, Bourgogne-Franche-Comté and PACA).